Posted on September 23, 2013 by akalfopoulou

“‘A starving person sheds a large portion of his weight in the first few weeks. As death approaches, the rate of weight diminution declines to zero,” says [Yanis]Varoufakis dryly.’”

“Death is the mother of beauty; hence from her,/ Alone, shall come fulfillment to our dreams/”

One of the first things I read the week I am back in Athens after being on Patmos for part of August is the statistics on rising suicides:

“Greece’s suicide rate has doubled since 2009 public health officials have warned, ahead of this year’s world suicide prevention day on Tuesday 10 September. According to official data, 1,245 Greeks took their own lives from 2009 to 2011, the public health directorate of Central Macedonia said in Thessaloniki…”

There had been a suicide on the island, a man in his 40s. And while still on Patmos, as I was getting groceries someone mentioned Michalis Aslanis’ earlier in the day. Aslanis, a well-known Greek fashion designer, known too for his genial demeanor and generosity in an industry that generally has little of either, had taken an overdose of pills. Apparently the person or persons he had given significant sums of money to, to pay his property taxes, had stolen it. He’d made a statement that he was “destroyed” about a week before his death. Both incidents were unexpected and reached me in the midst of what had been a summer of distances from the harsher realities of austerity. How successfully can anyone distance themselves really when what we carry is always a part of what we leave? Suicides have in common the certainty of a journey that will never return you to what you left. Strange though, the way the proximity of death changes the texture of life; the sensation of what is happening around you, or outside of you, collapses into what is happening in you. There is an inherent collectivity to the fact of grief. Greek and Shakespearean tragedies end with their different versions of catharsis leaving us feeling oddly connected, even elevated, in recognition of our shared fallibilities?

The news of the death on Patmos traveled quickly, it is a community of villages after all, but I heard the heavy tolling of the church bells as D and I were on our way to the sea. “Someone’s died,” I said which immediately changed the look on her face. D is from the city. “Do you hear the bells? They toll at that slow pace when someone dies.” Then we saw a young man pass on a motorcycle in black, and as we walked further down the road two women were coming out of their house with looks of stunned sadness, one calling to someone else to hurry up because the service had started. It was several days later that I found out who the man was who had hung himself, the brother of a woman I knew from one of the villages. I called her to give her my condolences but she could hardly speak, “it’s an impossible weight,” she said in Greek. “How am I supposed to carry this?” He had a family, someone who worked quite literally from dawn to dusk, he had hurt his back and thought he would not be able to keep providing for his family, his manhood was at stake, or this is what I gathered. “Life is a wave that never stops hitting you,” my friend said.

As a suicide the Orthodox church might have chosen not to bury the man with a service, but this was not the case, a sense of collective empathy for the suffering of those closest to the man was shared. While there is the stigma of suicide (which the man’s sister, in her grief, kept repeating with the question ‘why did he do this to us?’), the pain was respected by the community, including the church. I don’t know if it was the general pall of these deaths (Aslanis’ a week later, again discussed in the grocery stores and cafés), but just off the ship in Pireaus I notice a homeless man holed up in the crevice of a broken wall opposite of where the ship docked. Then, next to the metro station as I get the subway home, there’s a flashing sign that advertises “70¢ frappé + hotdog,” less than a euro for something to eat with coffee.

Island life has its redemptions; the beauty of the island for one, the sea (especially). The nights I fell asleep on the beach everything felt somehow manageable, or “placed” — no matter our many discussions on the crisis, and the repeated “what is waiting for us?” like a refrain — there were (not to sound cliché) the stars, quite literally. Like chandeliers in the night sky they made the facts, or realities, less oppressive. We swam the breaking lace of froth under moonlight, we talked, swam again, the sea’s currents like a tough muscle of purpose unlocking all the caged feelings of the city. Beauty does distance or frame death, the kind of death at least which feels unredeemed when people are disconnected, when the homeless and desperate on the streets in the city reflect the breakdown of any ability for the collective to save them.

I got an email from a friend who briefly quoted the Wallace Stevens line from “Sunday Morning”; death being “the mother of beauty”; he added, “I’d like to think beauty is the mother of beauty.” I suppose this was the feeling I carried with me from the island until the facts of the city tore into that reverie. Most horrifically was the murder of the 34 year-old rap musician and anti-fascist activist Pavlos Physsas by a Neo-Nazi Golden Dawn member last Tuesday night. The organized murder brought to light the chilling fact that the government has tolerated this group’s infiltrations into various organs of society. I use the noun deliberately, as we are indeed contaminated. The fact that this group is responsible for the ongoing harassment and violence to immigrants, that the police keep turning a blind eye, has escalated to the murder of Pavlos Physsas, an outspoken anti-fascist. Golden Dawn has denied involvement, but the murderer quite frankly pointed out he did this as a “political act.” Thanks to the paralysis and corruption of more of our organs, this group has steadily gained a following. They lambast the various politicians and ministers who have shirked putting people in jail for tax evasion, for covering their own dirty tracks, for not protecting “the Greeks”… and so on. Of course, the reluctance and dysfunction of the governing bodies to in fact clean up their mess, has created fertile ground for extremist groups such as these to belt out their racist and reductive diatribes. The “economics of suffering” has an implicit bias regarding which group or groups are singled out to “pay the price” in very concrete ways. The murder of Pavlos Physsas makes clear that the government has not felt itself connected to any economy outside that of its immediate economic priorities; which demonstrates its indifference to the suffering of its people. The servile and unquestioning manner in which both this government, and the previous one, has allowed the troika to define the terms of austerity is indicative. Death is the mother of beauty when death demonstrates our kinship, unredeemed it expresses darker realities like suicide and murder.

Recently a friend who has three children told me that the third child of families is now taxed. I called my accountant to ask if this was really the case. She said yes, that people’s taxes are gauged according to the size of one’s homes/apartments and families. Two years ago, families with a third child or more were given extra stipends from the government, a way to encourage population growth, as Greece has had one of the lowest birth rates in Europe. My friend said, “haven’t you heard the slogan? We can turn in our license plates if we can’t pay the taxes on our cars, but where are we going to turn in the third child?” I didn’t know what to say. I thought, of course of the brilliant sage of past, and his modest proposal (the title too of the Greek economist Yanis Varoufakis’ suggestions for resolving the euro crisis at http://yanisvaroufakis.eu/2013/07/15/new-a-modest-proposal).

Swift’s scathing 1729 satire, A Modest Proposal for Preventing the Children of Poor People From Being a Burthen to Their Parents or Country, and for Making Them Beneficial to the Publick is shockingly relevant to the current crisis. This line, among others, that “proposes” the “eating” of one’s children as a solution to Ireland’s famine is resonant:  “I grant this food may be somewhat dear, and therefore very proper for Landlords, who as they have already devoured most of the Parents, seem to have the best Title to the Children.” In the endless summer conversations about the crisis, one person suggested that Germany and the Eurozone players are trying to bring wages down to a level to compete with China. “It’s a delusion,” he said, “but they’re trying to make us competitive with China.” Like Chronos who ate his children.

Some days after Physsas’s murder I went with my daughter to see the “Adespotes Skyles,” first showing of “Βαλς των βρώμικων δρόμων” (Waltz of the Dirty Streets, http://www.culturenow.gr/5354/adespotes-skules-sti-skini), it was their first show of the season. It was in Exharxia, an area known for its gatherings of leftist and anarchic groups. The MAT police had turned up for whatever reason. They seem to spread themselves like cockroaches clinging to street corners. The “Skyles” have a skit where they chant lines from the Greek National Anthem, that is Dionysios Solomos’ poem “Hymn to Liberty” written in 1823: “Σὲ γνωρίζω ἀπὸ τὴν κόψι/Τοῦ σπαθιοῦ/τὴν τρομερή,/ Σὲ γνωρίζω ἀπὸ τὴν ὄψι,/ Ποὺ μὲ βιὰ μετράει τὴν γῆ.” “I recognize you by the blade of your sword/your incredible sword/ I recognize you by the violence that measures/cuts the earth…” (my very loose translation). Physsas was stabbed to death. The “Skyles” paused here to give emphasis to the Greek words for “blade” and “cut,” adding “scars”… repeating the word in Greek over and over, “oules, oules..” until in their softer, lilting tones, it started to sound like a lullaby. 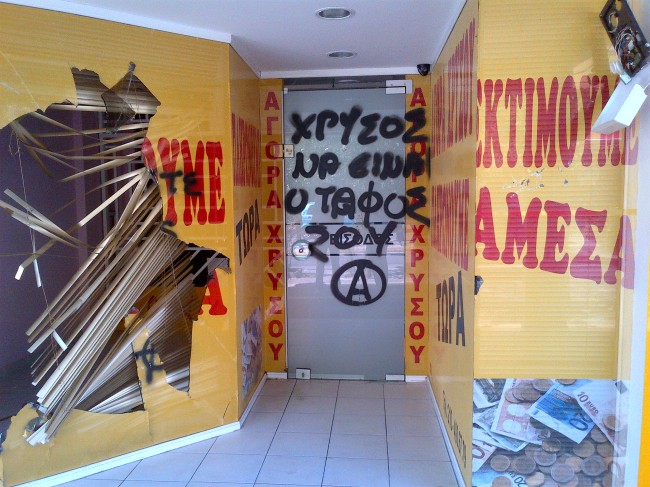 Photo credit: John Psaropoulos (Keratsini: a pawnshop on the street where Pavlos Physsas was murdered)

Author of three poetry collections, a book of essays, Ruin, Essays in Exilic Living, and most recently, A History of Too Much (Red Hen Press 2018).
View all posts by akalfopoulou →
This entry was posted in Uncategorized and tagged photo credit: John Psaropoulos ( Keratsini; a pawnshop on the street where Physsas was murdered). Bookmark the permalink.

1 Response to Economies of Suffering