“The first thing society does is to make you see your difficulties as a personal matter…but taking part in an effort that’s made by many people helps you realize that your inability to live like the majority around you isn’t your fault.”

from “Greece in Meltdown”

On my way to work, I see an old man zigzagging across Panepistimiou street leaning over his walker. The light is green and cars are whizzing by while he’s gradually but not very steadily making his way clutching at the walker. A bus 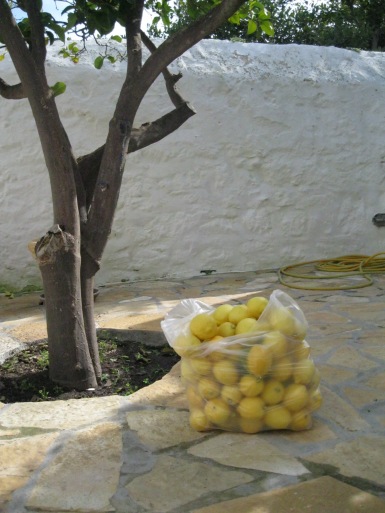 suddenly stops inches from him and the driver waves for him to continue. He in turn lifts his hand in a kind of halt gesture, as if the driver needed to think about stopping. There was no honking which is not the usual morning scene on Panepistimiou. The bus driver leans over his wheel as if he knows this is going to take awhile, and it does before the man, so precariously, reaches the other side of the road. The bus driver’s patience, the old man with his walker both seem like apt metaphors to describe some of the transformed dynamics of people’s attitudes to each other in the city. While the very real suffering is visible everywhere from the not-so-badly-dressed (usually women) who stand outside of supermarkets and banks whispering under their breaths for any change, to the clearly destitute huddled with their blankets on benches, steps, and street corners, it is now impossible to deny the devastation to the country’s economy, and equally impossible to be forgiving of the leadership that has allowed the country to reach this no exit. At the same time, new tolerances have developed between those living the fallout. There is a good deal of historical irony here, and it is dark. Andreas Papandreou with his Socialist PASOK party landslide win in 1981 had given a post-Civil War, post-Junta Greece (referred to as the “metapolitefsi”) reason for hope with his party’s slogan of “Change” or “Αλλαγή”.

That mantra for change was the country’s chance at modernity, or its modern moment. Andreas (as he was once affectionately referred to) came into office on the near-unconditional faith of a people who had been through the repressions of the Junta and the traumas of a Civil War that had split the country by ostracizing and exiling the Communist-supported Left; he officially recognized the contributions of the Greek Resistance, and Civil War veterans were welcomed back. He put forward socialist reforms that secured the right to strike, made civil marriages lawful and provided access to opportunities for higher education and higher-level public sector jobs for the average citizen. It is ironic now to think of Andreas in his apparent defiance of Superpower bullying, how he threatened to pull Greece out of the NATO Alliance and even the EU (which might have proved a truly radical, and visionary move). He was vocally against the presence of American army bases and CIA intelligence in Greece, and openly supportive of Palestinian refugees and the Palestinian cause. With his Harvard doctorate in Economics, his professorships in various universities including UC Berkeley where he chaired the department in the late 50s, his Chavez-like wild card personality and the debonair casualness of his signature turtleneck, Andreas mesmerized a Greece thirsty for direction, and above all for the “Change” he promised which  would build “a Greece for the Greeks” as he was fond of saying; that that promise bred a culture of clientelism rather than meritocracy, an inflated public sector that insured party votes as opposed to responsible state development, is, finally, a crime. Still, I have a hunch that Andreas – and this might be wishful thinking — but even Andreas with his mercurial agendas, would have found some other solution than that of the carte blanche invitation his son, the George Papandreou government, extended to the troika. At the very least I’m pretty sure he would have thrown a few people into jail. He did not, for example, try to obstruct court proceeding in the CRETA Bank scandal that sent Koskota, its director, to jail. Furthermore he was himself implicated and taken to court, then cleared in a 7 to 6 vote. As far as I know that was the last scandal that sent anyone to jail. Even Andreas’ favored minister Koutsoyiorgas had to stand trial, and in the process had a heart attack and died.

There have been a slew of scandals since in regard to the mismanagement of EU funds, involving both center right Nea Demokratia and the socialist PASOK governments though not always, or not only, because the Greek government took advantage. From VODAPHONE to SIMENS, the British and German investors gained lucrative packages as part of the 2004 Olympics project, while VODAPHONE was accused of providing the infrastructure for unauthorized British and American surveillance, in the case of SIMENS, there were politicians who received kickbacks for signing exclusively with the company. There are still some diehard PASOK people who will ask, almost wistfully, “What would Andreas have done?” It is a curious and bitter irony that for all the “Greece for Greeks” slogans that came out of the promise for “a New Greece” this current unelected government, has signed a second, massive loan under International law which effectively ends all sovereignty. Unlike the first package signed under Greek Constitutional law, the powers-that-be have made sure this time around that there will be no loopholes in the no-longer-gradual erosion of the country’s independence as a democratic nation state. In this way “they”, now a menacing “They”, can demand further adjustments to the Greek Constitution regarding taxation and property laws to make sure that no matter what happens, and they mean this literally (will blog on the content of the mnimonio at some point), the debt – this impossible debt – will be serviced. See Maria Margaroni’s, “Greece in Meltdown”

This all amounts to a state of siege in which our own politicians have agreed to “sell the country” – in return for apparent support? Money that will go to keep Europe’s banks solvent. How does one reconcile that some of the less idiotic members of the George Papandreou government interviewed by Alexis Papahelas admitted that they “didn’t realize” how bad the debt was (…ahem, isn’t this part of the job description for getting elected?); more of the Greek surreal as Anastasia described the interview. These MPs, saying they actually believed, with George Papandreou, that in late 2009 there was “enough money” when the Bank of Greece had all the information on spreadsheets at least as recently as 2008. Actually this goes all the way back to our savvy friends Gold & Sack, the Gold man with his Sacks – “Sacks O’ Gold”’s bloodhound scent for fiscal weakness is apparently “sexy” as today’s Ekathimerini reports it from Bloomberg, noting “The Goldman Sachs deal is a very sexy story between two sinners.”

Actually, there has always been something vaguely, maybe not so vaguely, sadomasochistic about the way the Greek political arena has played out its culpability in the various stages that have led the country to this cliff edge where we are now in free-fall: the “give and take” kind of clientelism that brought all hopes of “Αλλαγή” to this sad present had everything to do with “favors” and veiled threats of being “found out” in a kind of giddy noire scenario where macho dudes and suddenly blond women with conspicuously inflated lifestyles that included multiple cars, yachts, etc. pretended to be expressions of socialist causes that milked the state. Then again this isn’t specific to Greece, or Greeks, it’s just that the “New Greece” was new to the game, and maybe even naïve about it. Certainly there was no enlightened leadership, hence the idiotic kinds of answers to questions of culpability from what are supposed to be some of the more thoughtful members of the previous PASOK government. Even George, the former prime minister thinks he has helped save the country — by bringing in the troika, and proving incapable of putting forward reforms and investment incentives early enough on so that things might not have reached this grim moment. See John Psaropoulos’ Greek Debt Explainer. I have another question, too. If GP was so intent on grabbing tax evaders, as he has claimed, why was a list of names that included politicians not made public? Vasso Papandreou (no relation, but one of the oldest members in the party from Andreas’ government) publicly asked the question. Meanwhile, George is seen canoeing in his wet suit, discussing the possibilities for Green Energy in a Greece he helped mortgage to its uncertain future of lost sovereignty.

Had things gone differently, “had Andreas been a de Gaulle” as someone put it, perhaps Greece would have claimed a secure modernity, but as it stands, with its new highways and fabulous metro stations of mini museums, it is not exactly back to that period before Andreas, the beginning of the “metapolitefsi”; in some ways it’s more tragic, unlike then, there is a generation now who gained from the benefits of middle class living, with its assumptions and expectations. It was Andreas’ promise for Change, but rather than standing on ground that will promise growth the turf is, once again being taken out from under them; and the State has, once again, betrayed the people. Yet 30 years isn’t long enough to forget those experiences that are still in the collective memory of the country. There are families whose elders lived under the German Occupation, who fought in the Resistance. Behind the conspicuous consumption, a generation or two removed, people are still connected to beginnings that have less to do with the ostentation of the crude, often criminally negligent political elite of these past 30 years, and more to do with something more basic to the roots of the culture, that goes all the way back to antiquity, and it is καλοσύνη.

“Kalosini” is translated in Greek as “η καλή ψυχική διάθεση έναντι των άλλων” which means one’s good will, or more literally “good spirit” towards another. And this is what one is seeing more of. Eleni tells the supermarket manager he should put the newly expired food he’s about to throw into the garbage in a plastic bag of its own so someone can take it without having it contaminated. On the island of Patmos, the person who works in the phone company tells me he isn’t going to give me the wifi package I applied for “because next year it will be cheaper, and anyway, it’s not summer so you don’t really need it” I am taken by surprise since I made the request and he isn’t even an acquaintance. Like the metro tickets that now pepper the banisters of the escalators in the stations so people can pick them up, still unexpired, for the hour they’re good for, these gestures have everything to do with a collective empathy, a looking out for the other in a time when almost everyone feels like they’ve been hit by a truck. Or a bank.

Author of three poetry collections, a book of essays, Ruin, Essays in Exilic Living, and most recently, A History of Too Much (Red Hen Press 2018).
View all posts by akalfopoulou →
This entry was posted in Uncategorized. Bookmark the permalink.

5 Responses to Kαλοσύνη, a last refuge